Unfortunately COVID-19 is still with us but RECORDARE are still open for trading and your orders are processed and presented for dispatch as speedily as possible.  Your package might experience slight delays as it traverses its way to you, but we will do everything within our control to have it delivered ASAP.

Some good news is that we are able to offer you the popular Pro Patria coin again – place your order now to avoid dissapoinment.

We stock all the books authored by Wynand du Toit – find your favourite and order a signed personlised copy now!

At RECORDARE we only sell official and approved unit merchandise – this means that Special Forces approves of our Special Forces merchandise; the same goes for our other items where the relevant veterans association has given us their official authorisation.  We sell merchandise to both veterans (of the specific units) as well as to collectors – if we are commissioned to supply an item for members only, it will not be available in our RECORDARE store.  Collectors will know that their support of a specific unit is always appreciated and is often instrumental in preserving the history of that unit – this must never be confused/mistaken for a wannabee trying to ‘steal valor’ by pretending to be somebody they are not.  Beware of buying un-approved or unofficial merchandise from internet sellers; if a signed certificate of authenticity is not available with an item, ask “why not?”

Please don’t hesitate to contact us if you have any questions or requests.

The Southern Africa Medal in miniature

In August 1981, during Operation Protea, several Russian T34-85 tanks were shot out by the South African Defence Force at Xangongo in Angola. The Chief of the South African Defence Force at the time, General Jannie Geldenhuys, expressed the wish that one of these tanks should be recovered and taken to Pretoria, with the intention to use it as material to strike medals from. His idea was based on the origin of the British Victoria Cross, which was struck from the copper cascabels of a cannon from the Crimean War. The tank is still on display at the Fort Klapperkop Museum in Pretoria, while the resulting medal was the Southern Africa Medal.[1][4]
Unlike a copper cannon cascabel, however, the armour steel of a battle tank is too hard to be struck into medals, using hardened steel tooling. The tank itself was therefore not suitable to use to strike medals from. However, since the medal was to be struck in nickel-silver, an alloy of nickel, copper and zinc, several kilograms of copper was recovered from burnt cables in the Xangongo tank, melted, mixed in with molten nickel-silver and then used to manufacture a limited number of the Southern Africa Medal. 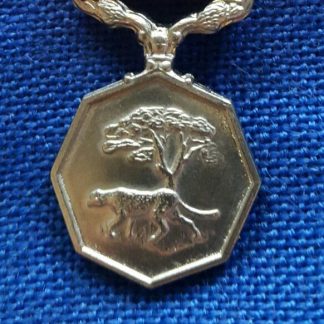