As the world continues dealing with the COVID-19 pandemic many countries are under national lockdown – at RECORDARE we are no different and unfortunately we cannot dispatch any international order during this period.  We are still open for trading and your orders are processed and ready for dispatch as soon as the lockdown restrictions are lifted to allow us to do so.  We are able to dispatch to South African destinations at present.

Have look at our Specials section…some lockdown specials are still available and waiting for you !!

We stock all the books authored by Wynand du Toit – find your favourite and order a signed personlised copy now!

At RECORDARE we only sell official and approved unit merchandise – this means that Special Forces approves of our Special Forces merchandise; the same goes for our other items where the relevant veterans association has given us their official authorisation.  We sell merchandise to both veterans (of the specific units) as well as to collectors – if we are commissioned to supply an item for members only, it will not be available in our RECORDARE store.  Collectors will know that their support of a specific unit is always appreciated and is often instrumental in preserving the history of that unit – this must never be confused/mistaken for a wannabee trying to ‘steal valor’ by pretending to be somebody they are not.  Beware of buying un-approved or unofficial merchandise from internet sellers; if a signed certificate of authenticity is not available with an item, ask “why not?”

Please don’t hesitate to contact us if you have any questions or requests.

When the National Party took South Africa out of the Commonwealth they embarked on a campaign to change the South African military emblems, insignia and medals and rid the SADF of anything “British” (especially the Queen’s crown which now had to go). In many instances these changes where resisted and a number of civilian force “Regiments” where able to hold onto some of their British heritage – however the medal sets where all changed and new medals instituted, except the John Chard Service medal series which survived the changes.

The John Chard Medal was instituted by Queen Elizabeth II on 6 April 1952, during the Tercentenary Van Riebeeck Festival, to replace the Efficiency Medal and the Air Efficiency Award which had been awarded to members of the Citizen Force between 1939 and 1952. It was named after John Chard VC, the lieutenant in command of the supply depot at Rorke’s Drift during the Anglo-Zulu War, when it was attacked by Zulus in January 1879. The story of John Chard was captured in the movie, Zulu (1964) and is currently available on YouTube at https://www.youtube.com/watch?v=HmPYoKK1zXw

This remembrance coin commemorates Lt John Chard and every coin is uniquely numbered for the serious collector.

The John Chard decoration/medal series continued in the SANDF from 1994, but was finally discontinued in 2003 and replaced by the SANDF’s new long service medals. This was done when when the new political dispensation did a sweeping change to all military emblems and insignia to rid it of anything the nationalists instituted. 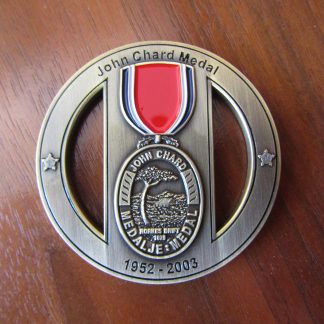